For years, the gaming world has waited for a great samurai game. With Ghost of Tsushima, the day has finally come. Moreover, this game isn’t just great; at its highs, it surpasses almost everything that has come before it.

The legend of Jin Sakai

The game’s story follows the historical events of the Mongol invasion of Japan. Specifically, the focus here is Tsushima island, invaded in 1274. Opening with the tragic stand made by 80 samurai against Mongol forces, including samurai Jin Sakai. Jin is one of the few survivors of a gory massacre, after which the player follows him on his journey to protect the people of Tsushima.

This story is quite a change in tone from some of Sucker Punch’s other releases. Where the inFAMOUS series of games often had a lighter tone, Ghost of Tsushima can be incredibly bleak. But this isn’t without good reason; during the story, Jin has to question his samurai way of life and its ability to protect those he cares about. The Mongol invaders have no regard for any code of honour. Therefore, Jin has to resort to stealth and become the ‘Ghost’.

Ghost of Tsushima features a strong main story, with a range of side activities to enjoy in its open world. While the generic side quests, known as ‘Tales of Tsushima’, are fairly standard for open-world games. However, they never feel like unnecessary padding. Often, these stories of Jin helping the island’s inhabitants can present emotional moments or interesting tactical scenarios. They enhance the overall experience, rather than detracting from it. And, completing these ‘Tales’ rewards the player with charms, which can be equipped to improve elements of Jin’s combat.

As well as these, the game features side quests throughout that explore individual characters. Through these quests, not only does the player learn more about major players in the story: they also learn more about Jin himself. As the story progresses, so to do the stories of those who live in its world. These tales can be incredibly emotionally deep; personally, I found some of the later quests touching in a way I wasn’t expecting from a samurai action title. I’d recommend taking the time to play these stories when you get the chance, as they add another layer of depth to this well-rounded story. I won’t spoil anything here, but trust me, its worth a few extra hours.

Finally, the last type of quests is the most rewarding (at least gear-wise). ‘Epic Tales’ allow Jin to unlock some incredible moves that you’ll want in your arsenal, as well as some outstanding pieces of gear to use. Plus, these quests are among the fastest in the game, as well as the most entertaining. ‘Epic Tales’ are some of the best sections of the game; be sure to stop and give them a go.

A world to bask in 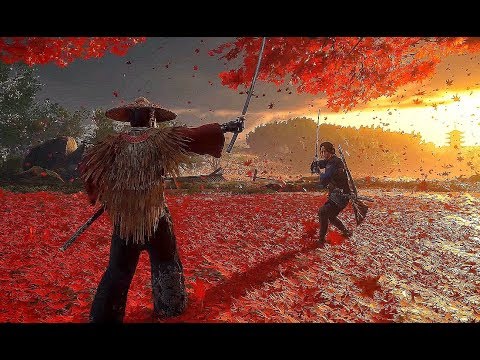 Ghost of Tsushima benefits from having one of the most gorgeous open-worlds we’ve ever seen on any console, let alone the PS4. When I played the game, I spent hours just walking through the scenery, listening to the sounds of the island of Tsushima. the game actively encourages you to stop and take in its beauty, as Haiku spots allow you to sit and compose a haiku poem while viewing the beauties of the scene you’re sitting in. Add to this the effort Sucker Punch has taken to create a clean and near-empty UI, and you have a game which provides tranquillity amid its action sequences. Trees and reeds blow in the wind, flowers blossom in vibrant colours, and wildlife teems around the player.

Yet, much of this natural world has a function within the game. Without a typical waypoint system of UI, Ghost of Tsushima uses the world itself to indicate points of interest. A column of smoke in the distance may be a quest for you to tackle, while foxes can lead Jin to Inari shrines. Even the wind itself guides Jin: when a waypoint is placed, the wind will blow towards it, and swipe downwards on the touchpad will increase the strength of the gusts. It’s clear that Sucker Punch has spent countless hours making the game as uncluttered as possible, to make sure that the focus is on the breathtaking vistas around you. without a doubt, they’ve succeeded. 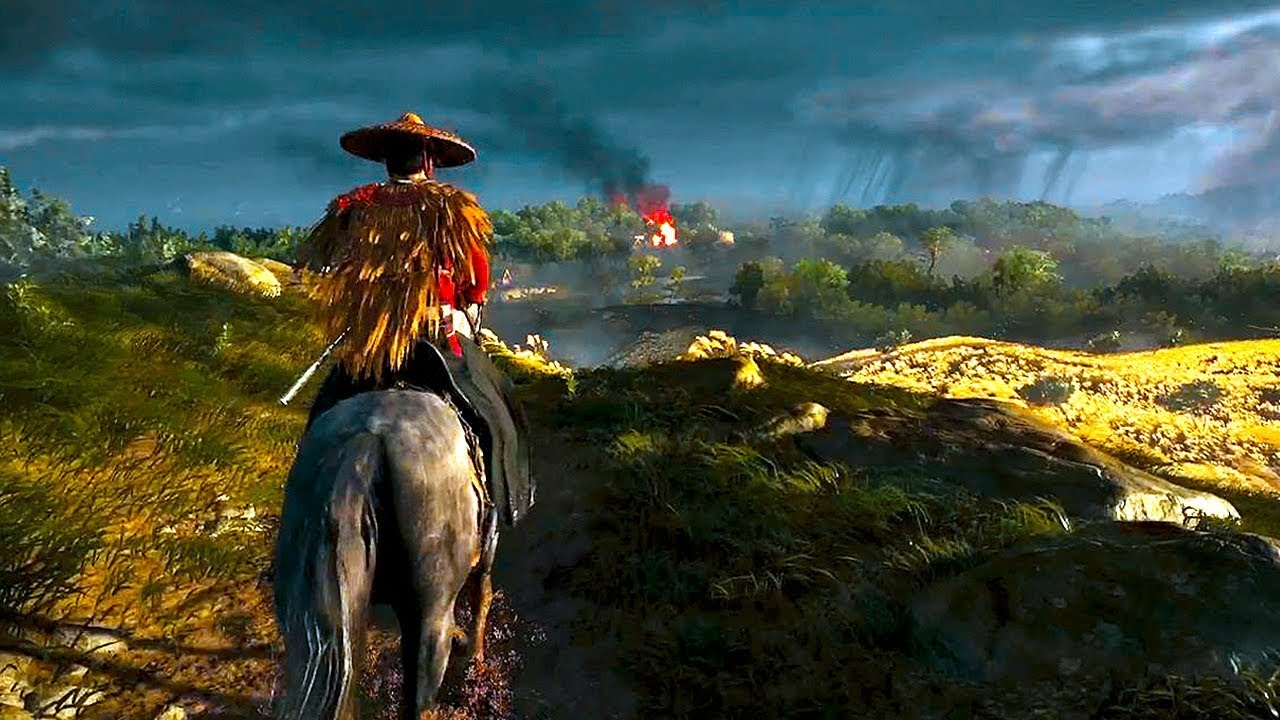 Sucker Punch knows that any player of Ghost of Tsushima will want to take photos of the world they’ve made. So, they decided to give us maybe the most in-depth photo mode we’ve ever seen. You can customise everything, from the petals and leaves in the air to the expression on Jin’s face. The intensity and direction of the wind can be adjusted to get Jin’s clothes blowing just the right way for an epic shot. The only issue with this near-perfect photo mode: Jin’s emotions aren’t really that different. But that doesn’t really detract from the quality of the screenshots you can get from this. It even has the capability to produce short movies, with the camera moving around to set positions. Photo mode will never be the same.

Possibly the most standout aspect of Ghost of Tsushima is the combat system. There are so many aspects to it, and its not a breeze by any means. The open, honourable samurai combat of the game is built around timing. Personally, it took me a good few hours to get really comfortable with the counter timings for enemy attacks. Combat is in some ways similar to old Assassin’s Creed titles, as you can take out enemies in a few hits if they’re timed correctly. Yet, timing itself isn’t enough to master the sword combat in this game.

Stances, unlocked as you progress through the game, are crucial. And, similar to Sekiro: Shadows Die Twice, each stance has its own benefits for combat style. The first stance that the player unlocks, the Stone Stance, is advantageous against swordsmen; the Water Stance, with its heavy attacks, is better for defeating enemies with shields. Mastery of stances can allow Jin to effortlessly carve through hordes of Mongol enemies. Also, defeating an enemy with the correct stance never gets old.

The way in which enemies, or Jin, can be defeated in a few blows not only adds to the thrill of the combat; its also a callback to the inspiration for numerous elements of the game, this inspiration being the movies of Akira Kurosawa. One of these game elements is the standoff feature, another part of combat. Before attacking Mongols or other enemies, Jin can engage in a standoff with his enemies. The player must then hold the ‘triangle’ button and wait for the enemy to move. Releasing the button at the correct time will lead to a swift victory. However, mistime the strike, and Jin will be left on the brink of death (often surrounded by enemies).

As if the cinematic of standoffs weren’t enough, Ghost of Tsushima also features the aptly named ‘Kurosawa Mode’ for players. This turns the game into a classic samurai movie for the player to enjoy and participate in. Colours are reduced to black and white, and grainy film quality is added. Each bout of combat is framed by a more cinematic approach. The audio switches to Japanese with English subtitles in Kurosawa Mode, but I’d recommend it regardless. It’s worth playing at least a small portion of the game with this mode turned on, just to experience the game in this way: as a modern samurai classic.

Maybe the only weak point for the game is its stealth component. As Jin progresses through the story, he begins to use more covert tactics to take on the Mongol invaders. Many of the stealth elements of the game are quite standard: being able to take cover in long grass, or using a stealth takedown on unaware enemies. However, stealth combat isn’t as deep as the samurai approach. While it gives the combat greater variety, forced stealth sections detract from the overall experience (sort of like the Mary Jane sections in Marvel’s Spider-Man). Combat is at its most entertaining when you go in openly; the stealth, while competent, often seems less well refined than the honourable battles the game offers.

Stealth combat also happens to feature some of the games few glitches. Problems with the enemy AI can arise during stealth parts of the game, such as tent flaps confusing enemies who’re pursuing Jin. this lack of polish in stealth combat makes it less appealing. Overall, its a slight let down when compared to the quality of the open combat system.

Although it isn’t perfect, Ghost of Tsushima is a fitting end to the era of PS4 exclusives. A masterclass in open-world gameplay, it provides an enjoyable storyline with many additional elements, as well as an incredible and deep combat system. Accompanied by a gorgeous world to explore, this game couldn’t be much more of a joy to play.

As always, why not check out and subscribe to our YouTube Channel here! If you have a news tip, be sure to email us at [email protected]

How Re: Zero – Starting Life in Another World – The Prophecy of the Throne remains true to the anime